Enjoying some practice at a park near my home, I was delighted to see several of the baseball diamonds in use. The sunlight was hazy-bright, not terrific, but it was still fun to watch the play while I carefully tried not to interfere with play in any way. I confess, it was tempting to think of flying down there.
I'll save that for the National Multi-gun championships in mid-April... Meanwhile, I keep my distance from events like these  What drones don't need right now is angry coaches and parents. Trying to be a good citizen here!
Working from an open field above the park, I flew over neutral territory to show the number of games in progress.
Look! Up in the sky! It's a bird! It's a plane!
Splat!  It's a bird.
Sorry, kids, it's only a drone...
Pretty good facilities for baseball teams!
Posted by CarlRoesslerblog at 3:52 PM No comments:

I'm home from a very satisfying and lucky trip to Mesa and its wonders. Good timing, too, because here in Vegas the wind began howling today and it is supposed to continue tomorrow. Whew!

Here's a nice section of the Apache Trail, which we can see in this still photo. Look carefully, and you can see the road fence as a faint line in the center of the mountain gradually moving from the lower left to upper right and disappearing around that last rounded rise:

Here's a short bit of a long descent:
This is the view rising above the Salt River just downstream from the Roosevelt Dam and Bridge:

For lots more, please check out those Phanfare galleries. Soon my webmaster will have complete galleries on my web site where the detail in the videos will be much sharper.
Posted by CarlRoesslerblog at 7:26 PM No comments:

After three initial brilliantly sunny days, I've now suffered a second cloudy one. The weather forecast all through this has been for 'sunny and 80 degrees.' I do wonder about these hundred-year-in-the future climate predictions. Just tell me what the weather is going to be tomorrow!

Needing some activity, I went to Lake Pleasant and found two new spots I want to shoot on a sunny day. This one is from a secluded but strategically-placed spot called Two Cow Cove, where I saw a speed boat owner doing bursts of speed and having to work on his engine each time.


Then I went to the North end of the lake, where I saw a heron sitting on a post. Of course it was silly to try to sneak up on him with a drone, but I didn't have anything else to do. Oh, well.
Finally, because I needed my exercise, I watched a kayaker doing his workout and felt much better!


Praying for sunshine tomorrow. Sob...
Posted by CarlRoesslerblog at 4:01 PM No comments:

In general, the desert scenery is vast and awesome, as those galleries show, and for February, the weather (until today) has been like Summer. There are several dams which have created large lakes. The lakes are watersport centers. The number of boats at the marinas and the number of mobile homes parked there tell me that the Summer must be pandemonium.

Here are a few highlights!

This map shows the drive to Roosevelt Dam and Lake. About two/thirds of that drive is on dirt road. First, the shoreline view out over Lake Pleasant.

Deep canyons are everywhere as we drive East toward Roosevelt Dam: 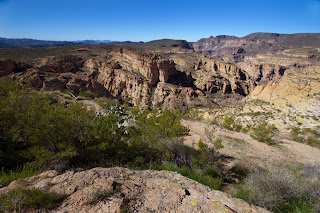 Many of the lakes are gorgeous--this is Lake Saguaro in the morning sunlight:
And a highlight was a beautiful day in the sky at Roosevelt Dam and Bridge.
And finally, the view through the Tonto Natural Bridge from the platform at the base of the Gowan Trail: 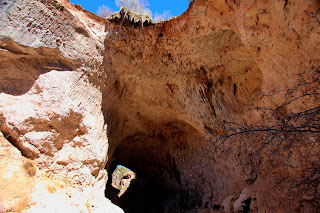 Much more to come, but keep watching my Phanfare galleries. http://divexprt.phanfare.com/7148460    (I can bulk upload with that software, where I can't here)...

Posted by CarlRoesslerblog at 6:06 PM No comments:

...and the weather became almost Spring-like. Bless those guardian angels!

The Sun was still low in the November sky, so the color and contrast weren't the best--but the subject matter was awesome!

First was by base in Window Rock. This rock marks the seat of government for the Navajo Nation. In the afternoon Sun, it is gorgeous!


I took the drone in for a closer look at the Window:
Earlier that day, I had driven North to Round Rock to re-visit Los Gigantes--without the wind:
Los Gigantes are seven miles East of the highway, while Edna's Needle and Hope Arch are nine miles West of it. Here's lonely Edna's Needle:
It is worth hovering just for a moment to view this unusual formation in the middle of nowhere.
Edna's Needle is about halfway from the car to Hope Arch. Falling out of Hope Arch almost killed me two years ago, so I give this remote formation the utmost respect. It seems annoyed at all times: 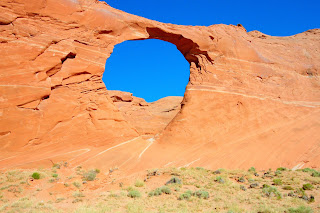 Still--let's fly over from Edna's Needle and visit:
There's more, but I'll put the rest up on my 'Most Recent' site at Phanfare.
More adventures soon!


Posted by CarlRoesslerblog at 1:27 PM No comments:

Bonus pay for the guardian angels...

They did it again.

The big storm and cold passed on toward the Midwest, and the skies cleared here. By midday it was cool but sunny--though the color values in Winter aren't the warm, rich colors of Summer!

I can't stand the lousy Internet access here, Very hard to get anything done but email and web browsing. Welcome to Navajo Land!

Try my Phanfare site, where I uploaded some tiny versions of the pictures I clipped from the videos. http://divexprt.phanfare.com/7069548

Everything else after I get home...

Posted by CarlRoesslerblog at 4:33 AM No comments:

Out of the frying pan...

This will be shorta nd sweet, because the upload speed here is 3 to 5 KILOBYTES per second. At home it is 600/second.

So, I managed to put some tiny bits on my Phanfare site:  http://divexprt.phanfare.com/2015/

You can feel my pain over there...
Posted by CarlRoesslerblog at 6:13 AM No comments: